An update on Ice Castle.  I was busy stitching beads thru the snow on Monday.   Still a lot of beading to go.  I have not even opened the 2nd bag which contains another 2 sets of beads. 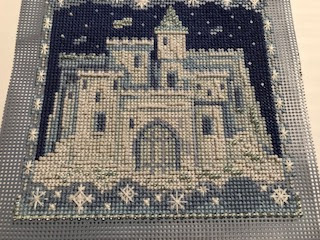 BTW
I'm till on page 3 of Pandemic.
Just plugging away

The first two pages are complete!   Only 18 more to go.  IF you look carefully, you can see where I went into page 3 before taking the photo.  The red mark at the top is actually a red "clothespin" for holding the excess fabric. 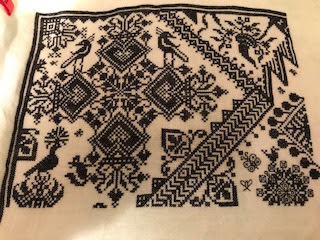 Today is the Festival of the Broken Needle, Hari-Kuyo. This is an important day in our needlework world. In detail:

This festival is a more than 400-year old Shinto and Buddhist tradition. On February 8th each year, women gather at shrines and temples to "bury" or "put to rest" their worn out needles. This ceremony is a way for the women to thank these needles and pins for their good service. At the same time they also wish for progress with their needlework.
The ceremony has been described as funeral-like as the needles are put in soft jelly cakes or tofu. This act symbolizes bringing rest to the needles for their faithful service.
Some people believe the tools have souls, and they are treated with care and respect. We rely on countless helpful tools which are the result of ingenuity and craftsmanship. Perhaps celebrating pins and needles and the service they provide reminds us of the many small things we should be thankful for.
It is also thought that sorrows the women carry are often passed to the needles as they stitch. The needles, in turn, are thought to take away the burden of some of the sorrows. Maybe by burying their needles, they are also able to bury their sorrows.
Posted by jhm at 11:59 AM 2 comments: 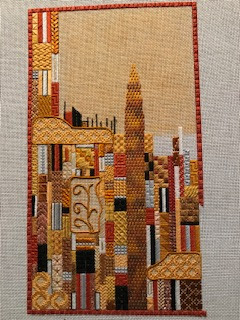 This is it.
Not much done - it's terrible
Too much else to do and this is NOT a grab-n-go piece.
The next couple of weeks are not looking much better.
You would think that with a pandemic I could get
something done but it just hasn't happened.
Hubby's Dr appts keep going and now he is showing side
effects from his treatments and I suspect
more things are going to change again.
I have to admit, I'm tired of doing everything
on someone else's schedule and just not getting  sleep.
I hope everyone else is doing well.
Please check out the other stitchers who do such
beautiful work.
Avis, Claire, Gun, Carole, Sue, Constanze, Christina, Kathy, Margaret, Cindy, Heidi, Jackie, Sunny, Megan, Deborah, Mary Margaret, Renee, Carmela, Sharon, Daisy, Anne, Connie, AJ, Jenny, Laura, Cathie, Linda, Helen
Posted by jhm at 5:45 PM 6 comments: 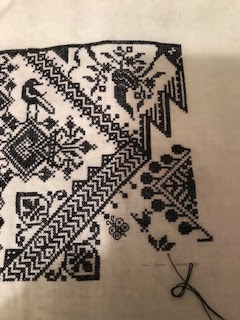