Last night I was part of an Artist's Walk.  A small nearby town puts on an annual Brick Street Artists' Walk.  The various shops on the brick street, aka Main street, sponsor an artist to display their wares/talents outside the shop for the evening.  One of my favorite local needlework shops is on Main street and the owner asked if I wanted to be their artist.

It was an interesting evening.  By virtue of being at the end of the "walk", traffic was not as heavy as further down the street.  Those who did stop to look and converse were surprised that I actually designed the pieces I had on display.  They seem to assume that I simply stitched from a pattern.  Where they thought the pattern came from, who knows.  The best part were the few who just appreciated the pieces for their artistic qualities and liked them for that alone.
Posted by jhm at 11:40 AM No comments: 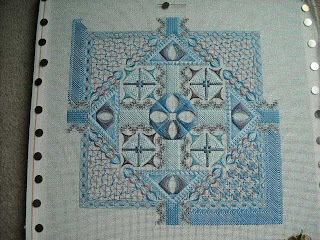 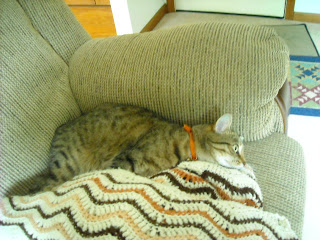 Over the week-end, a firend and I went to Fiber Fest.  I am a begining knitter and she is more advanced than I am.  The yarns were gorgeous!  The wool was soft!!!!  There were lots of types of wool - from angora (who were also there - live) to alpaca to sheep (also there live) to a few I've forgotten.  Going with a fellow sticher/knitter is so much more fun than going with a bored hubby (last year's experience).

Here are a couple of photos: 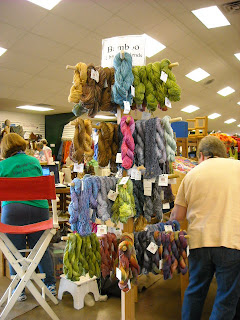 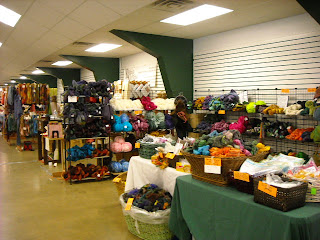 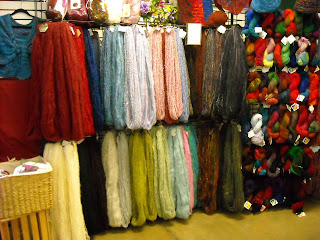 All photos taken with permission of vendors.
Posted by jhm at 10:11 AM No comments: 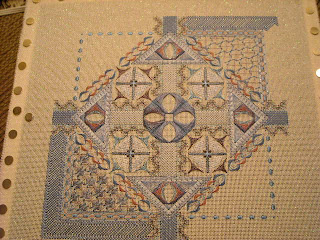 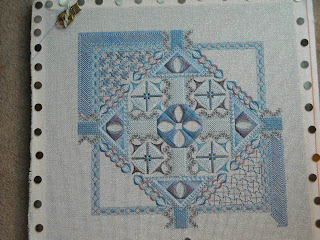 More progress has been made on Sea Opal.   I was waiting for the remainder of the ribbon to arrive before I could go further and now it is in the house and in the piece.  THe first photo shows just the new ribbon and the second shows some of the stitching around the ribbon.
Posted by jhm at 10:10 AM No comments: 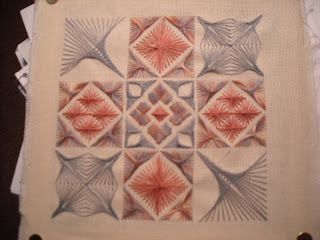 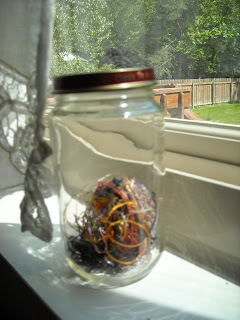 Here are the photos that I couln't get posted yesterday for some reason. 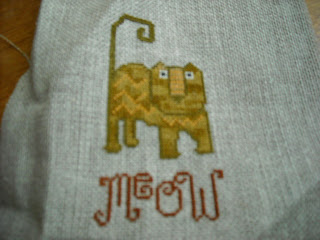 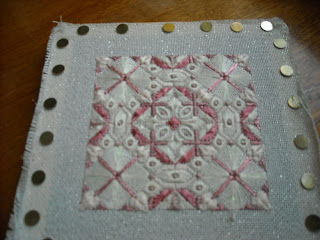 Xandadu (forgive me if the spelling is wrong) by Jim Wurth.  This was in Needlepointers with the last couple of years.  Jim did his in gold and silver if I remember correctly. 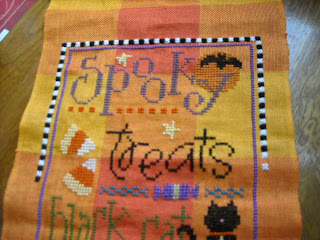 For the black and white checked border, I picked #8 perle cotton.  I am stitching the four x's as the pattern calls for but then am making them into large smyra crosses.  It really makes the border stand out and gives great texture. 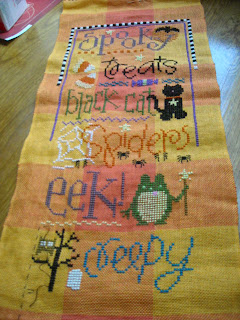 What you can't see very well is some of the minor changes I've made.  Ihad some matallic purple, so I used that on the candy wrapper in the treats area. The spider web is #12 perle cotton to make it more fine.
The frog's tummy is a rayon, the same color as what's called for but somehow doesn't look quite right on the orange background.  I tried using the same regular floss called for underneath the tombstone (in Creepy)  but it looked strange, not at all like grass, even weird grass!  So out it came and I will look for something else.
I also used a metallic for the star on the frog's wand.
Posted by jhm at 10:54 AM No comments: 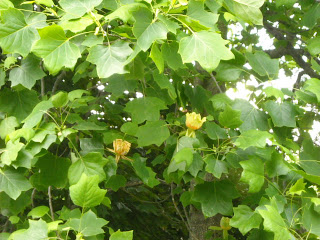 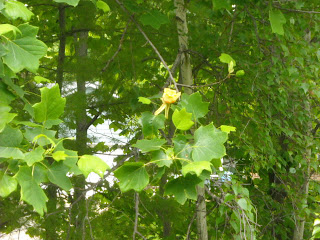 This is the Tulip Tree outside my "office"window.  Last week it had beautiful "tulips" blooming like crazy, as did the one in the backyard.  Then we had storms, awful storms.  We were lucky and didn't have tornadoes in my area but not that far away did get hit.  I'm glad I snapped these photos before because now, the tree has lost it's "tulips" prematurely due to the storm.

On the stitching front  I have finished up a couple of things that only needed a few missing stitches and made more progress on the Boo Club.

Sorry that it took me a week to get back to the blog.  June will be really hetic.  I have a very busy schedule between family functions, ANG and other committments.  But I will try to get the blog updated.
Posted by jhm at 5:54 AM No comments: