Stitching has been a bit different this last week.  I have finished up a commission piece.  I changed my mine on it three times so it has taken far longer than I ever expected.  The piece goes to the new owner on Saturday.  Then I can show some of the photos (I hope, need permission first).

In between I have done some reading and spent far too much time on the books for the non-profits.  People need to turn things in properly and on time.

I could use a vacation however it has snowed again.  I'm a bit tired of snow and cancellations or various things.  THINK SPRING !  Maybe that will get us there sooner (ha-ha).  The forecast is for more snow and freezing temps.  At least I don't live in Boston.  My heart goes out to them.
Posted by jhm at 3:31 AM No comments:

Quick note.  February books are updated.  we weathered last week-end's storm, more snow than expected but less ice. Still lots of highways shut down.  Hopefully the next storm will be as kind or kinder.

Micro blogging Monday.
Posted by jhm at 10:41 PM No comments:

The "Father of His Country", George Washington was born on February 22, 1732. He became commander in chief of the Continental Army in 1775, and  fought a long and arduous war for freedom from British rule. The war was finally over in 1781, when the Continental Army with the help of the French, forced British General Cornwallis to surrender at Yorktown.
In 1787, Washington was unanimously elected president by the Constitutional Convention in Philadelphia. He took the oath of office in 1789. He served two terms of office from 1789 until 1797.
After the presidency, Washington retired to his home in Mount Vernon, Virgina where he died on December 14, 1799 of a throat infection. 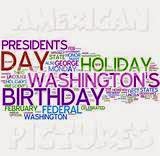 Today is Random Acts of Kindness Day. And, you know what to do...perform a few random acts of kindness. Almost any kind deed will do. And, we highly recommend you perform kind acts on as many people as you can.
Posted by jhm at 7:00 AM No comments: 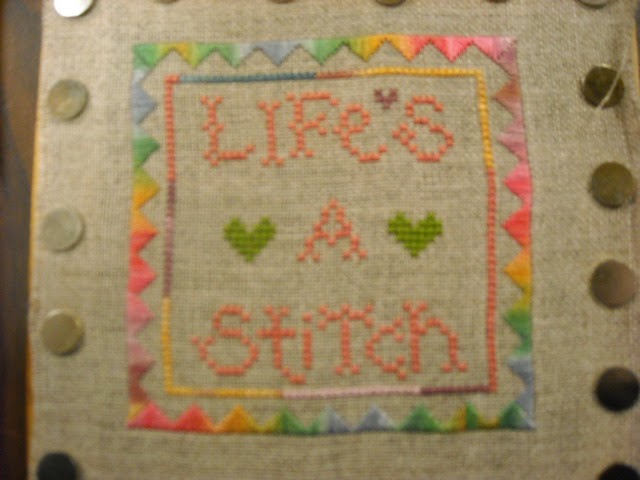 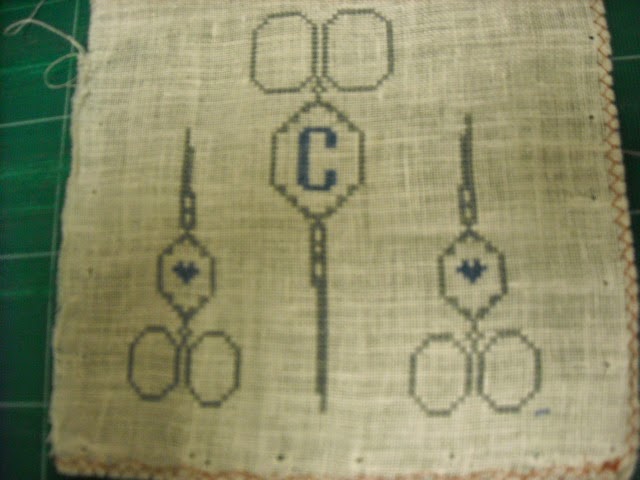 These are two small pieces I stitched for a friend of mine.  A mutual friend will finish them off for me.  Something small and sweet.  The top one is a Lizzie Kate but I changed the flowers out for hearts.  The bottom in a scissor design by an old friend, Meri. 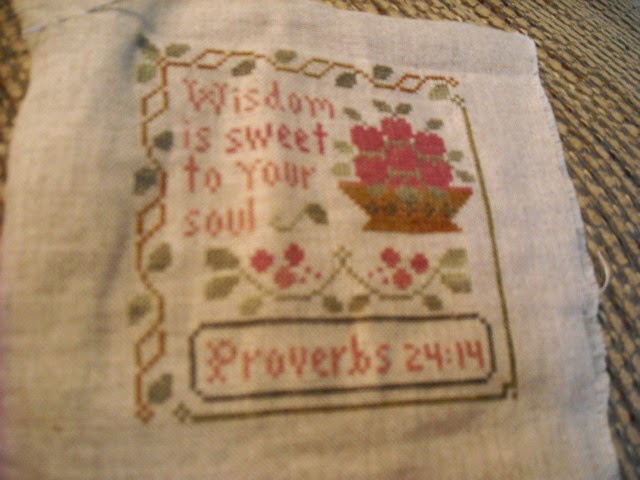 Slightly better photo than the last update. Now it only needs a border around the whole thing and it will be done.  Not today though.  On to other things.  I think I am a bit over-extended.  Volunteering seems to be taking over my life.  I need to learn how to say no.
Posted by jhm at 9:30 AM No comments:

February 12th.is Abraham Lincoln's actual birth date. However, in modern times, we celebrate Lincoln, and all of the U.S. Presidents, on President's Day.
Every American knows President Abraham Lincoln, the 16th President of the United States. "Honest Abe", as he was commonly known, was born in the wilderness country of Hardin County, Kentucky on February 12, 1809.
Abraham Lincoln became president in 1861. Although he hated war, he was drawn into it as he believed it was the only was to save the nation, after the southern states declared their secession from the Union.
In addition to serving as president during the civil war and saving the Union,  Lincoln wrote the Emancipation Proclamation that ended slavery in the U.S. forever.He also wrote and gave The Gettysburg Address, memorializing the bloodiest and most important battle of the Civil War. Gettysburg proved to be the turning point of the war.
Shortly after the war ended, Abraham Lincoln became the first U.S. President to be assassinated. He was shot and mortally wounded on Good Friday, April 14, 1865 by John Wilkes Booth in Ford's Theatre.

One of the few presidents that schoolkids ever remember after they grow up.
Posted by jhm at 7:30 AM No comments: 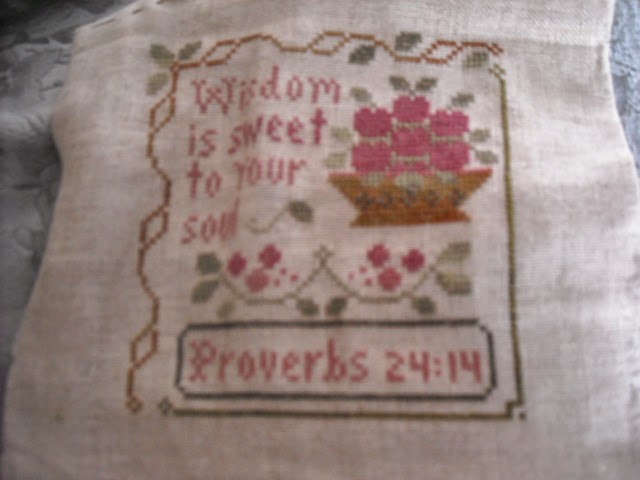 Not even a good photo but more progress is being made.  Wisdom received it's M and the basket filled in and there are two new leaves.  Slowly, just like a turtle.

Alas, no photos of the Turtle trot.  I still have not worked on even one of those pieces.  The commission seems to be taking all of my time with occasional lapses for the piece above.
Posted by jhm at 10:30 AM 1 comment:


Knowledge is a process of piling up facts; wisdom lies in their simplification.
Martin H. Fischer


There are few things in life more heartwarming than to be welcomed by a cat.
Tay Hohoff


I give thanks for this perfect day. Miracle will follow miracle, and wonders will never cease.
Unknown
Posted by jhm at 11:00 AM No comments:

Boy Scout Day celebrates the birthday of Scouting in America. On February 8, 1910, Chicago publisher William Dickson Boyce filed incorporation papers in the District of Columbia to create the Boy Scouts of America.
Scouting groups across the country celebrate this day. Often a cake will be served at the weekly meeting or on a camp out. Scout Sunday, the Sunday nearest the 8th of February, will often be marked with a church service, followed by a pancake breakfast.
Cub Scouts and Boy Scouts offer a tremendously valuable program of life skills and values for millions of boys. It has been popular ever since Lord Baden-Powell founded Boy Scouts in the early 1900s in Great Britain. The top award of Eagle Scout, is an accomplishment that reaps recognition, rewards, and benefits for a young man throughout his life.

The Boy Scout motto is "Do a good turn daily."

In 2013, Scouts provided more than 17 million hours of service to their communities. Based on the national volunteer-hour value, that's more than $377 million of service.

My son did scouts from the Cub Scouts thru his 18th birthday.  He served on staff at White Stag Camp - which is usually called the leadership training camp in other states.  He is also an Eagle Scout.

To earn the Eagle Scout rank, the highest advancement rank in Scouting, a Boy Scout must fulfill requirements in the areas of leadership, service, and outdoor skills.  A number of specific skills are required to advance through the ranks—Tenderfoot, Second Class, First Class, Star, Life, and Eagle. To advance, a Boy Scout must pass specific tests that are organized by requirements and merit badges.  21 merit badges must be earned to qualify for Eagle Scout.   Of this group, 13 badges are required, including First Aid, Citizenship in the Community, Citizenship in the Nation, Citizenship in the World, Communication, Cooking, Personal Fitness, Personal Management, Camping, and Family Life. In addition, a Scout has a choice between Emergency Preparedness and Lifesaving, Cycling, Hiking, and Swimming, and Environmental Science and Sustainability.

While a Life Scout, a Scout plans, develops, and gives leadership to others in a service project helpful to any religious institution, school, or the community.  In addition to providing service and fulfilling the part of the Scout Oath, “to help other people at all times,” one of the primary purposes of the Eagle Scout service project is to demonstrate or hone, or to learn and develop, leadership skills.

I was attempting to photograph some needlework but someone else decided they wanted the sunlight.  After all, sunlight has been hard to come by this winter. 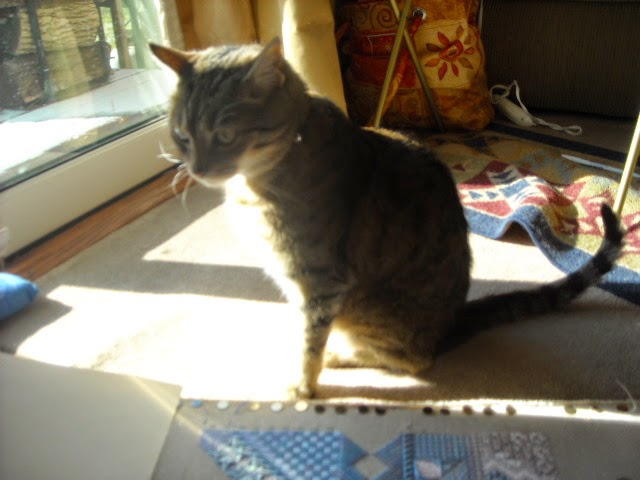 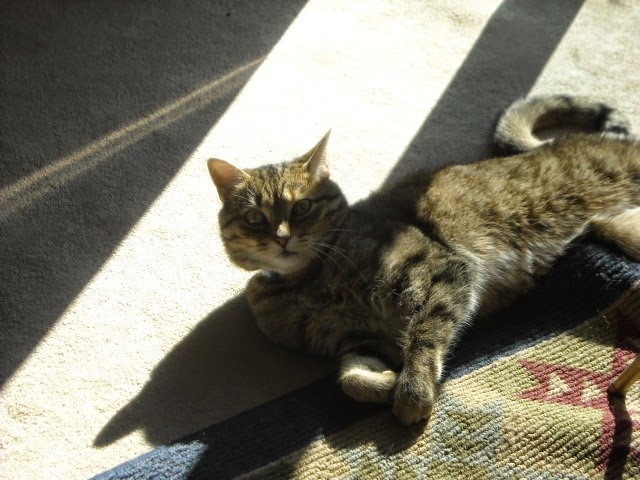 Hogging the sunlight (after I moved the stitching)
Posted by jhm at 8:30 AM No comments:

I'm starting to make some progress on my New Year's start. 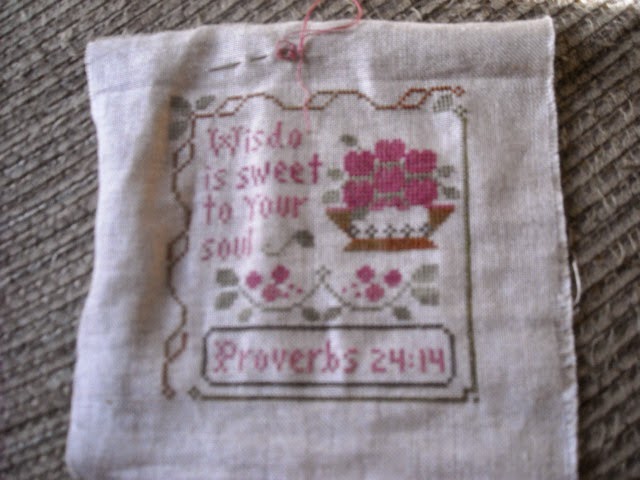 As you can  I have gotten most of the words in.  Wisdom seems to be missing it's M.  The basket  still has some open areas and the leaves around the edge are still MIA (missing in action). 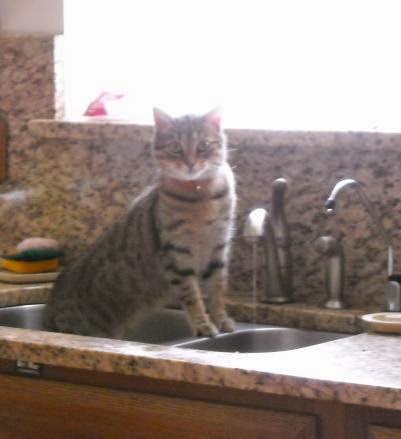 Guess what?  we are expecting more snow tomorrow (on Wednesday).  We haven't gotten as much as last year or the last two storms but really, I'm done with snow for the season.  Too bad it isn't done!
Posted by jhm at 11:20 PM No comments:

February has several things that it is known for - example, it is Black History Month,  National Heart Month and National Cherry Month - as well as George Washington's birthday, Abe Lincoln's Birthday and of course, the biggie, Valentine's Day.

I also found that February is Women Inventors Month, Library Lovers Month and Spunky Old Broads Month.  There are a few more but these were my top three.  And so obviously the header needs to change.  I think you can figure out which theme I went with (at least for now).
Posted by jhm at 7:00 AM No comments:

Groundhog Day is celebrated in the U.S. each year on February 2nd. On this day in mid-winter, the groundhog awakens from a long winter's nap, and goes outside of his den to see if he sees his shadow. This tradition is big, on an otherwise cold and dreary mid-winter's day.
According to legend, if the groundhog sees his shadow (a sunny morning), there will be six more weeks of winter. He then returns to his den and goes back to sleep. If however, he does not see his shadow (cloudy days), he plays around outside of his hole for a while. If he does not see his shadow, spring is just around the corner.
The Groundhog's Day tradition travelled long ways. It comes from German roots. German immigrants brought the tradition with them from Germany. As they settled in hills of Pennsylvania, they began the tradition of using the Groundhog to predict the the arrival of Spring. The tradition is based upon Candlemas, the day that is the midpoint between Winter and Spring. A famous Candlemas poems goes:
If Candlemas be fair and bright,
Winter has another flight.
If Candlemas brings clouds and rain,
Winter will not come again.
Punxsutawney, Pennsylvania is the site of the annual Ground Hog event. Our little rodent friend (yes, Groundhogs are classified as rodents) is called Punxsutawney Phil. He has been making this annual winter prediction since 1887. There are a few other "predictors" around the country, but they all pale in comparison to Phil's ability to predict the remainder of winter.
For the Record Phil sees his shadow about 9 out of 10 times

The last book for January has been added.  The list will stay until I finish reading something in February.
2,854 pages (9 books) read in January.  Slightly less than 2014 and lots more than 2013.  Last year was snowier (more time indoors) and I was a lot less busy with other commitments.  No chunksters read in January.

For those who enjoy football, enjoy the game tonight, otherwise enjoy the party and watch the commercials.
Posted by jhm at 12:50 PM No comments: