Memorial Day - Remember them all

It is the VETERAN,
not the preacher, who has given us freedom of religion.


It is
the VETERAN,
not the campus organizer,
who has given us freedom to assemble.

It is
the VETERAN,
not the lawyer,
who has given us the right to a fair trial.

It is
the VETERAN,
not the politician,
Who has given us the right to vote.

It is the
VETERAN who
salutes the Flag, 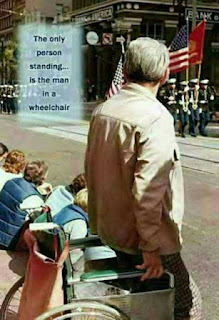 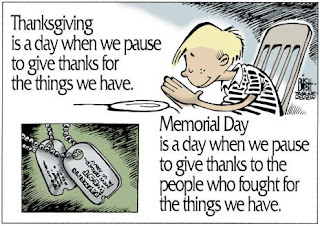 MY Heroes - one gone and one still here 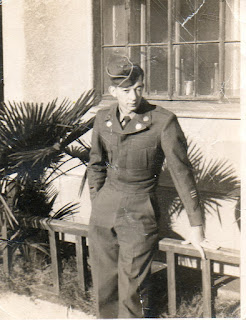 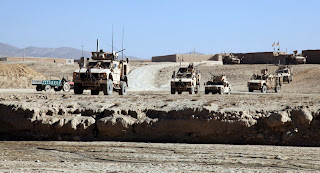 Today in my state, there is only one thing on people's mind (and it's not stitching) - the Indy 500 !

Some folks go to the race, others watch it on tv or listen on the radio, lots of folks have great race parties and some of us just ignore it (which it really, really hard to do).

Whatever you do this Sunday, enjoy yourselves and don't get too overheated!

Stitching in the air conditioning is sounding better and better!
Posted by jhm at 10:01 AM 1 comment:

I went looking for something different for today's date.  I finally picked the item below out since I read so many books.  Just something a bit different.

May 26
The first copies of the classic vampire novel Dracula, by Irish writer Bram Stoker, appear in London bookshops on this day in 1897.
A childhood invalid, Stoker grew up to become a football (soccer) star at Trinity College, Dublin. After graduation, he got a job in civil service at Dublin Castle, where he worked for the next 10 years while writing drama reviews for the Dublin Mail on the side. In this way, Stoker met the well-respected actor Sir Henry Irving, who hired him as his manager. Stoker stayed in the post for most of the next three decades, writing Irving's voluminous correspondence for him and accompanying him on tours in the United States. Over the years, Stoker began writing a number of horror stories for magazines, and in 1890 he published his first novel, The Snake's Pass.
Stoker would go on to publish 17 novels in all, but it was his 1897 novel Dracula that eventually earned him literary fame and became known as a masterpiece of Victorian-era Gothic literature. Written in the form of diaries and journals of its main characters, Dracula is the story of a vampire who makes his way from Transylvania--a region of Eastern Europe now in Romania--to Yorkshire, England, and preys on innocents there to get the blood he needs to live. Stoker had originally named the vampire "Count Wampyr." He found the name Dracula in a book on Wallachia and Moldavia written by retired diplomat William Wilkinson, which he borrowed from a Yorkshire public library during his family's vacations there.
Posted by jhm at 9:56 PM No comments:

I just found out that May 12 is "Hug your Cat" Day.  It also happens to be one of my daughter's birthday.  How appropriate - both daughters are avid cat lovers.   Another reason to mark the day in my calender.
Posted by jhm at 12:32 PM No comments:

There is a shop that has opened somewhat recently (March 2012) in Connecticut.  The interesting things about it are the hours and the classes.   The shop is only open from 10 - 3 tues-sat.  Being closed on mondays for shops is like the old adage of the doctor playing golf on wednesdays.  But closing at 3 pm?  Seems a bit early to me.

But the part I like is the last line is all the class descriptions - "All classes can be done remotely via Skype."    I don't have Skype but know plenty of people who do, including stitchers.

Check it out for yourself - The Enriched Stitch  or check out her blog
Posted by jhm at 11:37 PM 1 comment:

Someone posted about this view.

Our Stitching Bloggers Question is all about May Flowers.

What's your favorite floral piece that you've stitched? Do you prefer your flowers as the centerpiece of the design or as an accent?

I prefer mine usually as an accent.  I do have one UFO/WIP that is back in progress thathas far too much floral I've decided.  Far too many color changes, etc.
Probably my favorite floralpieces have been those where the flower/floralarea has been done in blackwork.  Stylized flowers are more my thing than something real looking.  However, real flowers are always a wonderful gift and much appreciated.
Posted by jhm at 7:00 PM No comments:

Yesterday I had a delightful class sponsored by my local ANG chapter.  "How to do a stitch guide for painted canvas".   The morning was spent with various ways to look at a piece, deciding where to place emphasis (i.e. focal point), when to place texture or not, etc.    After a wonderful lunch at a local resturant (not a chain), we returned to the library and focused in on the various canvas pieces brought by the class members.   The techiques for analying a piece work well for line drawn canvas and even for charted canvas when we want to change something.

Have you ever had a case of the “stitching blahs” where you just didn’t want to stitch? Or maybe it was more like you didn’t get to stitch because you were busy and that created a chain reaction sense of the “blahs” and led to even less stitching…. sort of like a case of “the Mondays” that we are all familiar with. How do you handle your stitching blahs and get back into stitching mode?

I've rarely had a time when I dodn't want to stitch, usually it has occurred when I've been really ill (flu, etc).  Usually my blahs hit when I don't have time to stitch or when I don't have something stitching related scheduled.  Lucky for me, my EGA has something scheduled for most Mondays, exceptin December.  I also have a stitch group that meets on Wednesday that I dearly love as well.

Another day of thunderstorms.  Good news is that the tulip tree is blooming and the temps are starting to rise.
Posted by jhm at 12:34 PM No comments: