I may have my photo but then I fogot to post it.  Yikes! 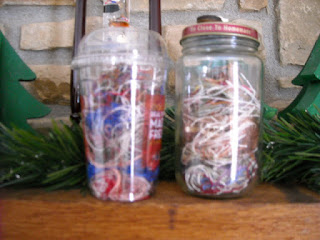 I finally found it.  I knew I took a photo of my year-end (2012) TUSAL but haven't been able to find it.   I went to download new photos I took for something and found it.  I had forgotten to take it off the camera.  Geeez!

Valentine's here was quiet.  Hubby got me flowers and cleaned up after dinner.  I cooked sea scallops for an appetizer, salmon and pasta for dinner, along with garlic bread.  We skipped the sweet stuff.

And now this morning, snow.  A good reason to stay in for the day and relax - maybe more stitching time!
Posted by jhm at 12:14 PM No comments:

BERNE, Ind.—Annie’s, a leader in the crafts market, has acquired Just CrossStitch and Sampler & Antique Needlework Quarterly from Hoffman Media.
The move further establishes Annie’s as one of the largest and most diverse sources of craft designs and instruction in the U.S., with five other special interest craft titles, including Crochet!, Creative Knitting, Crochet World, Quilter’s World and CardMaker.
The company also produces three craft catalogs (Annie’s Crochet & Crafts, Annie’s Knit & Yarn and Annie’s Quilt & Sew), a TV show (Knit and Crochet Now!), a variety of craft kit clubs and scores of new craft books each year.
Annie’s offers thousands of download patterns and other products, including digital versions of magazines and online classes. It has dozens of websites, as well as a strong presence on newsstands and in craft retailers across the country.
Annie’s is part of the third-generation Muselman family business based in Berne, Ind., near Fort Wayne.
Just CrossStitch and Sampler & Antique Needlework Quarterly have been the premier publications in the cross-stitch category since first coming on the market in 1983.
Founded by Phyllis Hoffman DePiano, president and chief executive officer of Hoffman Media, the magazines highlight handwork from centuries past and include needlework projects that challenge and build the skills of the contemporary needleworker.
“These titles are an important addition in expanding needlework offerings to our customers,” Michele Fortune, Annie’s executive vice president, said. “In their many years of publication, they have earned the highest respect of the cross-stitch community.”
DePiano commented, “After 30 years of publishing Just CrossStitch, it is wonderful to know that the magazine will be in the hands of Annie’s. Their position in the craft and needlework industry makes them the perfect match for this magazine.
“Annie’s is a family-owned business like Hoffman Media, and I have such respect for their business success. I look forward to seeing Just CrossStitch continue to be an industry leader in their hands.”
This marks the third acquisition by Annie’s in 2012. The company added the Knit and Crochet Now! TV show in August, and Country Sampler magazine in October.
Annie’s also has a nostalgia magazine (Good Old Days), as well as a companion catalog and related products.
Hoffman Media is a privately held, leading special-interest publisher based in Birmingham, Ala., and specializes in publications targeted to the women’s market.
The company was founded in 1983 by DePiano as Symbol of Excellence Publishers, Inc. and was renamed Hoffman Media in 1998.
“This transaction accomplishes some strategic initiatives we began working on a couple of years ago,” said Eric Hoffman, EVP and COO of Hoffman Media.
“Hoffman Media will be more focused than ever, and will continue to build our business around cooking, entertaining and women’s lifestyle special interest categories.
“We believe Annie’s is the perfect company to take the cross-stitching brands to the next level and truly wish them the best in their continued success.”

###
Annie’s (Annies-Publishing.com) is part of the third-generation Muselman family business headquartered in Berne, Ind., near Fort Wayne. Its products are targeted to home and family interests, including crafts, nostalgia and home décor. The Muselman business began in 1925 with the founding of Economy Printing Concern in Berne. EP Graphics, as it is known today, is still owned by the Muselman family.
Posted by jhm at 4:41 PM No comments:

We went on a short vacation to warm up.  Unfortunately when we came home on monday, it's still cold here.  Yesterday it even tried to snow.  So far, it has been a semi-mild winter - lots of snow in December, flurries in January and who knows what is to come in February.  I'm just trying to stay warm!

More tomorrow on the trip.  Today is for playing catch-up.