Yesterday my husband and I helped our youngest daughter and her husband pack up their house for the final part of their move to another state.  Also helping was her father-in-law and later her cousin-in-law.  It was a very long eight plus hours.  We missed an hour or two of the packing due to oversleeping and two closed roads.  We suspect the roads were closed due to flooding.  It had been raining for the last day or so and was raining all day yesterday as well.  This morning it is gloomy and the winds are high and now the temps are starting to drop.  Hopefully they are having decent weather to drive to their new home.  It's a good day to curl up with a good book or your stitching.  I think that's what I might do today - along with lots of hot tea.
Posted by jhm at 11:55 AM No comments:

My book list is updated.  61 books for the year so far.  I may even reach my goal this year.  Remains to be seen though.

We've heard from our son.  He has arrived safely and gotten his unit set up and functional.  He reports that the weather is already turning cold.  He also commented that he hasn't seen more than a few inches of snow since the last time he was in Aghanistan.  I hope he stays warm.

I have one request - everyone can pray for the safety of all our soldiers stationed overseas, along with their familieswaiting at home.

Time for some overdue photos. 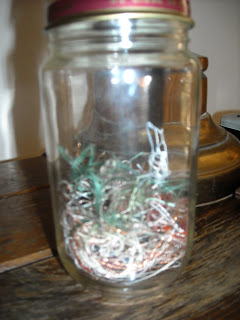 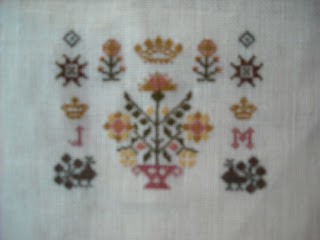 Things around this household have been busy lately as well as emotional.  It all seem to start with the departure of our son for his second tour of Afghanistan.  He is on active duty and we knew it would be coming however that doesn't make it any easier or make us worry less.
From there we moved into family birthdayswhich started the busy week of an ANG board meeting, an ANG meeting, an EGA workshop, followed by an EGA meeting and don't forget to sqeeze in the DAR meeting for the month - all crammed into about 10 days.  Plus more proposals to get out in the mail, so on and on and on.  Somewhere in there hubby wanted some attention too.  We all go thru periods like thisbut while it's happening, it just seems overwhelming at times.
Here's a photo of some samples from the ANG cording class. 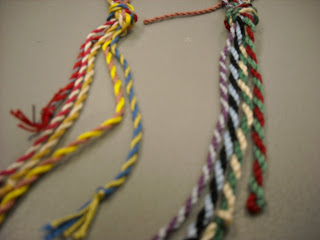 More tomorrow!
Posted by jhm at 5:26 AM No comments:

I went to take photos of the thread jar and a another finish from my 15 new starts list aka the January challenge but the batteries were dead in my camera!  They still have not been replaced due to other things happening in our life.  More on that later.

Meanwhile, the thread jar is on hold but then again, so is the stitching.
Posted by jhm at 12:29 AM No comments: