Tis a wonderful night for ghouls and goblins, the rains have settled to a mist and the fog grows as it rolls in.  A truely ghostly night.  But alas the creatures of Halloween have been told- STOP. A storm of epic proportions is rolling into wipe away everything and start anew.* 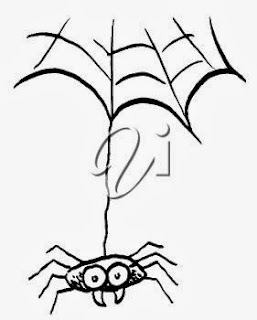 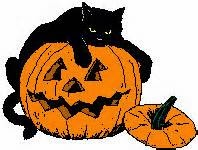 *  A severe storm is headed our way - driving rain, thunder, lightening and chances of tornadoes.  Halloween has officially been delayed one day.  Yesterday was very foggy and dreary,misting most of the day(and had rained thru the night).﻿
Posted by jhm at 7:40 AM No comments: 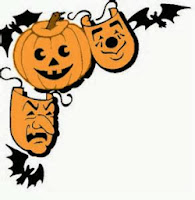 It's nearly time for Halloween!  The frost is definitely on our pumpkins.  This will be a chilly Halloween around these woods!

I hope everyone has their costumes ready and the pumpkins filled with goodies to give out.  There's still time to get ready.
Posted by jhm at 4:34 AM No comments:

Today's viewing is the class for ANG National 2014 in Chicago.  This is an Encore piece.  It as previously taught at an EGA National Seminar. 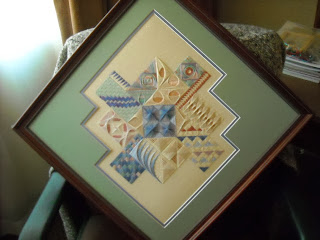 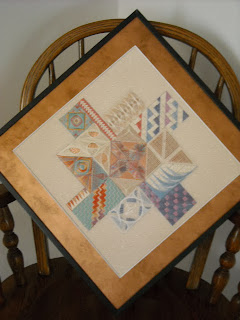 The one with the greenish mat is one of my student's version.  The gold mat is mine - the original.
This class (like Diamond Panes) encourages you to switch some colors around.  This piece also lets you move around certain sections.  There are a total of 14 sections and certain ones are interchangeable.

Diamond Panes shows4 sections of speciality stitches but there are a total of 6 available to choose from in class.

Next up will be the class for the Rocky Mountain Regional in 2014, being held in New Mexico.
Posted by jhm at 4:51 PM 1 comment:

Over the next week or so I want to introduce my classes for 2014.

Up first is the class for EGA NAtional seminar in Phoenix in 2014 - Diamond Panes.  You can also see it here and see all the other classes and still have time to pre-register. 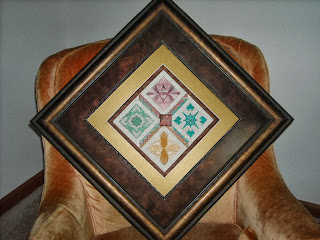 For more detailed photos and the other classes, stay tuned!

I'm not sure if I mentioned this before or not but since 30 September, we have been babysiting our oldest grandson who is 3.  His Nana (the other grandmother) is his regular care giver/daycare/sitter and we are usually the back-up.   Well, Nana decided she needed/wanted a vacation-the whole month of October plus a a day or either side.  It has been interesting.  I realize I have forgotten a lot about 3 years old and they can really wear you out.  I have also forgotten a lot about potty training (not my favorite part of childhood) which we have been working on as well.

Between the grandson and the hubby, October has been a tiring month and I have had to miss a lot of stitching things/obligations.  This past monday was an exception.  Our EGA chapter has two
stitch-ins a month - sampler group and sew'n sews.  Well, monday was at someone's house who also has young grandchildren and a toy area for her grandkids so I asked if my grnadson could come and she said yes!   It was a wonderful day.  I sat a thte table where I could keep an eye on the kiddo and yet be part of the group.  The kiddo behaved, made a little mess with the toys but easily and quickly picked up.  (hejust tends to leave things in place when done playing).  He ate a good lunch when I knew he was getting tired he announced he was ready to go home.  He actually lasted longer than I thought and just short of my max limit I had set.  So we picked up toys and packed up.  Five minutes after the car is moving, he is sound asleep.  When we got home, he went right up for the rest of his nap.  He is really good about naptime.  I try to tell him about 15-20 minutes ahead and usually he comes up to me earlier and says he is ready.

Anyhow I ave photos of what I have gotten done between Monday, some evenings and some naptimes - though neither piece is complete. 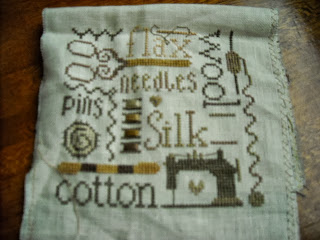 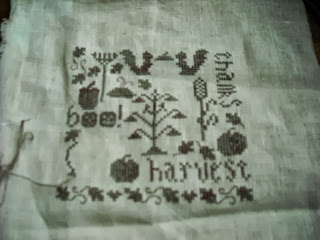 The bottom picture looks like it's in b/w but it's not.  It is all stitched in Gentle Art's Simply Shaker Brick Path.  It has grays, browns and rust in it.   The o's in boo are stitched over 1, part of the corn stalk is stitched in Symra Cross, the top of the large acorn is over rice stitches and when done the botton will be satin stitches.  At the top, is asissi should be the word Autumn but I have not decided if I will do that or not.

The top piece called for just two colors in the sepia range.  But I decided to add a little more color but still keeping it somewhat in subtle tones.

My big projects have all been put away until November.  Even then I have to start thinking about the holidays and planning for them as well as other things.  Who knows they may linger until after New Year's and then it's time to start planning on the new grandchild due 1 Feb.
Posted by jhm at 10:24 AM No comments: 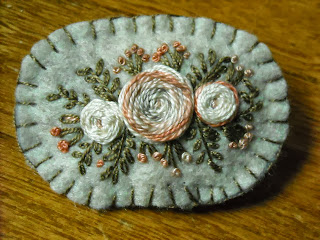 And for some reason, now it works.  May I present my first felted lapel pin.

The computer threw me out when I was trying to retrieve photosfrom Lauren's class on the last post.  Hopefully it won't this time. 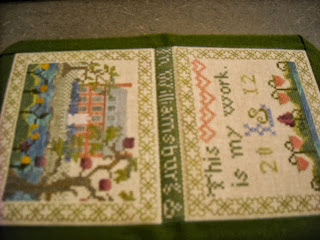 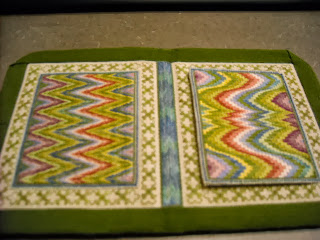 This is what it should look like when I'm done.  I'm nowhere near there yet!!!!!
This past monday at our regularly scheduled EGA meeting we had a class on making lapel pins.  I didn't finish in class (only one did) but later that  night (after blowing the driveway clear of leaves and grass, vacuuming the house, cooking dinner for the dau, sil and grandson and a few other chores) I did finish something - the project.  Ta Ta!
or maybe not.  It won't load!
On the bright side, hubby started PT yesterday.  First he will be working on flexability.  It will be awhile before he gets to work on strengthening the arm/shoulder/collar bone.  Meanwhile he is not to hold anything weighing more than a coffee cup.  My luck it will be snowing before he gets to do anything again.
Posted by jhm at 2:59 PM 1 comment:

Now I can't remember if I told you that hubby got out of the sling contraption or now.  A quick view of what it looked like. 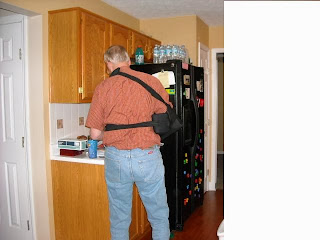 You can see how thick the wedge was and it went around to the middle front of him as well.  He wore it 24/7 for 10 weeks.  Finally he gets to start physical therapy.

I did manage an occasional escape with someone else keepting an eye on him, not that it was exactly called that.

Anyhow I did manage to get to my Lauren Sauer class back in September.

Where do I begin.  The last few weeks have had so much happen and yet the days trudge on by.  I'll start with the good news.

After 10 weeks in a sling contraption, hubby is finally out of it!  He's not allowed to hold more than a coffee mug of weight.  He has temporary physical therapy (PT).  The real hard stuff starts next week.  Driving is still an issue since he drives a stick shift.  I'm hoping that by the end of the month,  he gets full driving privileges back.

THe upsetting news is the break-in in the neighborhood earlier this week.   Two males rang and rang the doorbell and upon getting no response, assumed no one was home and kicked in the door.  UNfortunately for them, the homeowners were home, having a lazy day and surprised the would be thiefs.  THe thiefs were chased to another neighborhood about 2-3 miles away where someone called 911 because there were strange men running thru her bakyard.  And so two counties came together to catch the want-to-be thiefs.  Onlyinjurywas that one of the canines bit one the arrestees.
THe scary part was that I was starting our morning walk with my 3 yr old grandson and saw all the cop cars and watched the canine unit drive thru the neighborhood and had no idea of what was happening. On of the cops on foot even saw me and never said a word.But when we stopped for the 3 yr old to examine some weed or something on the ground, one of the neighbors came out and told me what was happening and then the kiddo and I went straight back to the house - quickly!
THe alleged theives definitely picked the wrong house.  WHen they were scarded off by the homeowner, they evven left behind their stolen car.  Yuu see, the homeowner had a gun and knew how to use it - retired cop!.  And of course the news made a big deal about this.  Hopefully this will scare off other would-be robbers/home invaders knowing that cops live in the neighbohood - at least I can only hope so.

The other so-so news is that I popped my elbow out place.  It was easily (??) popped back by the doctor but meanwhile it caused a lot of pain elsewhere in the arm and now is very tender and I can barely lift things with that arm.  Appartenly it needs a lot of TLC for a couple of weeks and I don't have any time or that.  Watching a 3 yr old all day, 5 days a weeks doesn't leave you much time to "baby" anything but them.

So stitching is slowed down and hopefully in a week or so I can make up time.  Meanwhile, as soon as EGA posts the photos for the 2014 seminar, check out Diamond Panes - that's mine!  4 diamond panes are shown but the class will include 6 total to choose from and there will be some color choices.