part 2 of the bus trip

Continuing on with the bus trip.

Shopping was great at the Celebrations show.  However, a friend and I decided we wanted to go to downtown old St. Charles.  So we hopped on the shuttle and away we went.

We had lunch at a nice resturant where the food was good (not great) and the service was lousy.  Glad it was that way instead of the opposite.  Then we wnadered down the street.  Had to stop in the spice and tea shop.  I came home with a couple of new teas (loose leaf).  We found the cross stitch shop and enjoyed it but skipped the quilt shop (big mistake we heard).  We found the glassmaker - beautiful pieces, even Tiffany style items.  Absolutely gorgeous!  Had to visit the British shop (not real name).  Beautiful things, kilts, Irish items, etc..

Then we wandered into the street fair - a juried arts show.  The vendors were fab!  Both of us ended up with a couple of items for Christmas presents.  It was certainly a nice bonus to the day. 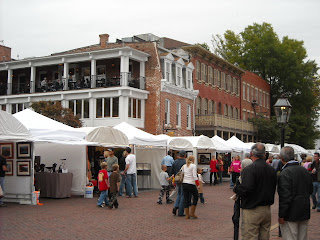 It turns out that I only took one shot of the fair.  But you get a good idea.  It was all along one side of the street, mostly across from resturants and bars, who moved tables out into the street for better business opportunities.

After lunch and wandering, we returned to the hotel and did more shopping of needlework.  Here's some of what I bought. 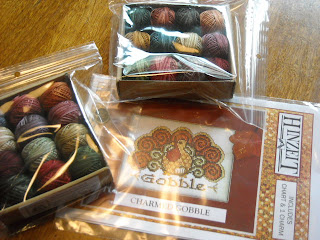 I really like turkeys to have around in November to remind of us of Thanksgiving so I just had to have this one from Hinzet - Gobble.  ALos new threads for me to play with. 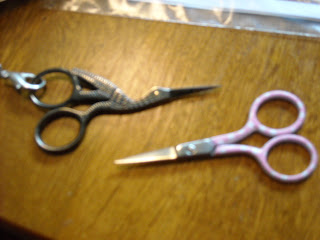 Of course I had to have new (more) scissors.  Hard to see but it is a pair of pewter storks and pink polka dots.  Both were more than reasonablely priced.
Between the shops closing for the night and the bus leaving, we had just over an hour.  My friend and I sat down with some of the others and had some snacks (popcorns, chips, salsa) and a drink.  I had something new to me - Sangria rum punch.  far too smooth going down.  very tasty.
The trip home was relatively quiet.  The cold dinners which had been pre-ordered were passed out and eaten and soon stitchers were drowsing.  With it getting dark so early, it was hard to stitch so I didn't even try.  My seatmate was quickly asleep.  I dozed for part of the trip but not all of it this time.  We arrived back to our cars about 12:45 and I was home by 1:05 am.  I hugged the cats, gave them treats and told it was time to head off to bed - they quickly bounded up the stairs before I even made to the foot of the stairs.  Very quickly we were settled in bed and fast asleep.
Would I do It again?  Yes!  The sheer enthusiam of all the stitchers was great and really inspiring!
Posted by jhm at 6:15 AM 1 comment:

Somewhere in the past couple of weeks, my computer decided it no longer liked the version of Internet Explorer that I was using and shut down various functions on my computer.  At first, it was a puzzle, what was causing this problem, then the next problem, etc.  Finally we figured out there was one single thing causing everything - a supposedly outdated version of Explorer.

Now I hate the set-up and look of my computer.  Everything seems out of whack, not in the right place and it is now several extra steps to get to my bookmarks - they are suppose to be easy!  I think that the new Explorer hates google.  Nothing in google wants to act right now.

But here goes with fun and old news. 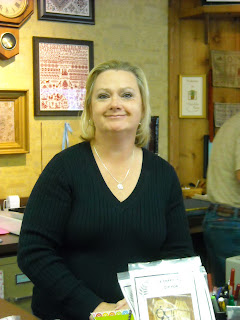 Our lovely LNS owner.
A couple of weeks ago, one of my LNS sponsored a bus trip to St. Charles, MO to visit Celebrations!
A very delightful needlework show.  I rearranged several things with my DH and at the last minute freed up the schedule so I could go.  The cats looked at me funny as I was up in what most considered the middle of the night.  I packed my little cooler, pillow and stitching bag and off to pick up a friend.  We met the bus at o'dark thirty ( a familiar military term for many) on the north side of town.  Then off to the west side to pick more passengers.  Not long after that, muffins were passed out and I zonked!  Yes, I slept until the either the Missouri or Mississippi river.  I think I missed a lot of darkness. 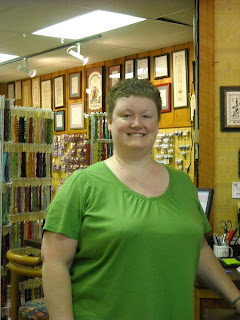 Our  lovely cruise director who was awake the whole trip.  She was an absolute delight and so cheerful for so early in the morning!

Here are a recreation of our wonderful gift bags. Mine got a bit wrinkled being stuffed in other things while I slept. 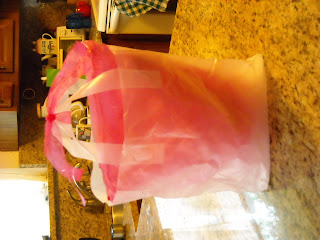 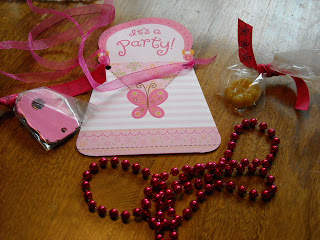 I can't seem to get the bag turned correctly.  Inside you can see where some party beads, a large pink nametag, a pen, (not in photo), beeswax, and floss tags.  There was also some candy which was consumed before photos.

The vendors quickly caught on that the pink nametag meant we were from the bus group.  We were quite the stir.  I heard that we were the only bus group to show during the whole show.  From the looks of some ladies bags on the return trip - I 'm guessing the vendors were glad to see us.

The show was the entire 4th floor. Here are some of the banners for the shopping. 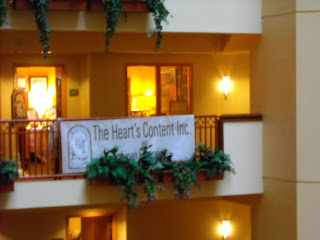 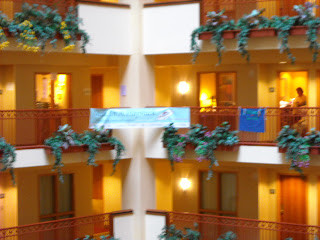 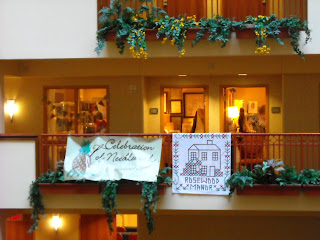 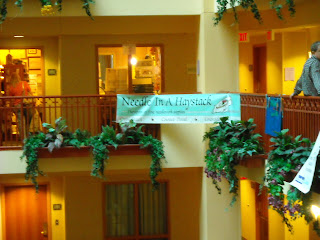 Not the greatest photos I realize but if you look into the windows, you can see some of the displays.
Posted by jhm at 4:47 PM 2 comments:

I'm now up to 55 books  for the year.  Still behind last year's numbers.  However, there is more stitching going on this year.
Posted by jhm at 11:15 PM No comments:

Yesterday (while I was busy shopping), EGA posted the details on the 2012 Seminar in New Mexico.
Check out http://www.egausa.org/
The photos are not yet linked to the class descriptions but will be.  All the photos shown were taken at the seminar in Naples, FL which just ended.  The photos are labeled but you have to scroll thru everything to get to what you want.  So to make it simple, here is my class piece for seminar 2012. 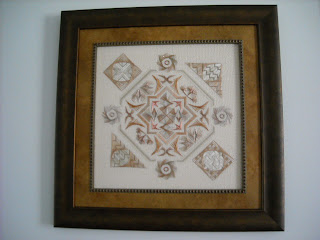 This is SandStorm.  Stitched on 18 count canvas with a wide variety of fibers and stitches.  There are numerous options within the instructions for changing threads, colors, etc.  There are 4 different corners shown, you can pick one or two or do all four.  Everyone's Sandstorm will be personal.
Posted by jhm at 4:53 PM No comments: 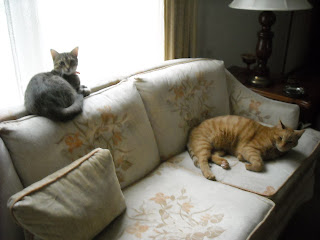 A moment of silence please.
Posted by jhm at 9:44 PM No comments: 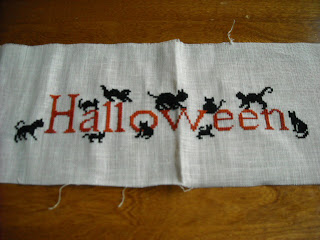 This was a small but cute piece that I started and finished over the Labor Day week-end.
Posted by jhm at 7:15 AM 1 comment:

Here's the Thread jar for the end of August 2011.  Just haven't had the right timing to get the photo up.  The jar was being filled again by the morning of the 1st. 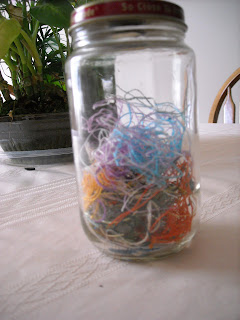 There's a nice surprise piece coming in September!
Posted by jhm at 9:03 AM No comments:

As promised - the photos by sections of the completed piece. 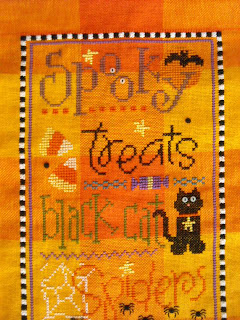 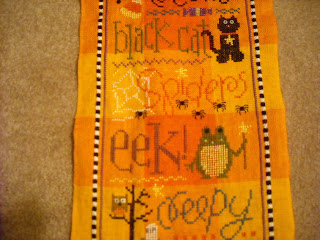 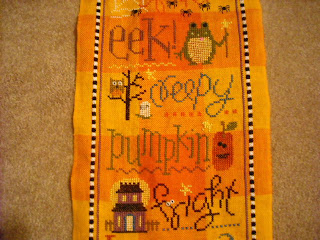 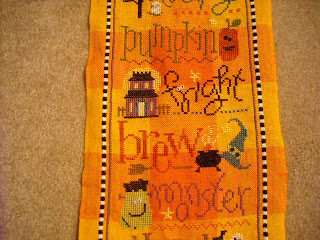 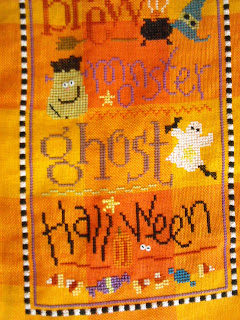 A little sloppy because I can not get them to line up and still be in the proper order.  I figure, better the right order rather than lining up straight.  The bottom really isn't as crooked as the photo shows.  It's nice and even and ready for the bottom hardware of the bell pull.  Actually all it needs is a good pressing after I pick up the bell pull hardware.
All the stars have #4 braid in them.  The candy wrappers either have a metallic or a rayon so they will look shiny.  The frog's tummy is also rayon.  The ghost and the spider web are stitched in a white metallic.  I added a small RIP to the tombstone and eliminated part of the grass.  The cat's nose and collar, as well as the frog's tongue are also done in a rayon.  All the little "extras"came out of my stash.  Except for the pumpkin in the "Pumpkin" rectangle, I used DMC.  I actually used the "Tomato" gentle arts for the pumpkin.  It's the only thing that would really show up against the fabric.
Thanks to Marie for the fabric inspiration.  Not sure if she was doing the Boo Club or the 2012 version, but she was using this fabric which really inspired me to get moving and start on my Boo CLub.  It was started in May after receiving the fabric from my not-so-local but wonderful LNS and finished at the end of August 2011.
Posted by jhm at 12:03 AM No comments:

Actually I could say that about a few things that have been finished lately.  However, this one is just waiting for it's bellpull to come in. 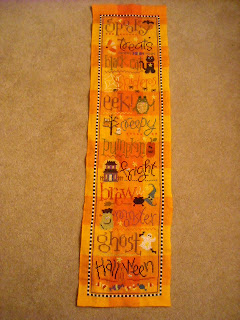