For two and half of the past three weeks we have been on a cruise ship, crossing the Atlantic, starting in Harwich, England and arriving in Boston.  The initial time was spent in London having a great time.

During the cruise, I read (8 books), stitched (a little), beaded (an on-board activity), did a folded paper card (another ship activity), walked, toured, and definitely relaxed.  And of course we ate well (usually).  There were a few weird meals which I found alternatives for.  I ate a lot of fish (which I Love) and far too many desserts.

Our cruise had some strange highlights.   When we went to dock at the Faroe Islands  (above Scotland and below Iceland), the ship hit a power line (dead, thank heavens) that wasn't supoosed to be there.  It sent a crew member to the hospital  but he was on his way home for recupation after a few days.  But the line broke the mast. Yes, it broke the mast! 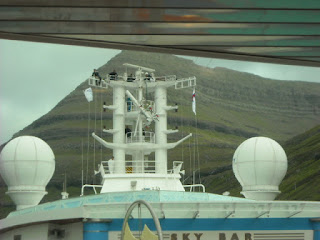 You can see it dangling by the wires that were inside the mast.  It also broke the funnel (not seen here).  In the background you can see part of the Faroe Islands.  They are mostly mountainous - great for raising sheep - and originally shaped by volcanoes.   When we arrived in Iceland is when the ship got the mast repaired - we had a two day stay there (this was part of the schedule).   Someone actually asked the Captain if the ship carried a spare mast in the hold.

Then there were the hurricanes or should I say the hurricane.  It seems that hurricanes Leslie and Michael decided to merge as they went further north and headed straight for Newfunderland (?sp?).  So well ahead of time the ship plotted a new course so we could come in around and below the hurricane.  As a result we only had one rocky night and that wasn't even too bad.  But we had to miss our stop in St. John's.

The last incident was the crew member that got sick and need to be med-evacted  (sp??)  We never did hear for sure what was wrong but the ship wanted a helicopter to come in and the Canadian coast guard couldn't do it.  So suddenly we are literally full steam ahead and headed for Halifax to meet a cutter from the coast guard.   We were almost ontop of Peggy's cove when we met up with the cutter.  The cutter's pilot was quite skillful in getting his ship beside ours to transfer the patient in about a 5 second time frame.  The cruise ship needed to list by at least two degrees in order to do the transfer.  we were amazed by the skills invovlved and the engineering that allowed all this to happen.

After that it was full steam ahead again to get to Boston in time.  We made it to Boston on time but then Immigration was late in arriving to clear the ship.  We had planned ahead and had an afternoon flight so we were fine.

Tomorrow, more on the fun stuff.
Posted by jhm at 1:44 PM