While I was stitching with a group of friends, a couple of them were stitching on "The Wave" - a charted canvas piece we did at a retreat a while back.  I was mentioning making one small change - changing a fiber - and was going to this new store after the group was done for the day.   It turned out that 3 cars worth all dropped in on the store. I found the new threads that I wanted plus several more.

It got me inspired to go back to work on my Wave.  I had been thinking I would work on my canvas pieces more in the winter.  I pulled it out anyhow.  I discovered I still had some beads to do before working on the border. After my digging, I found my needle threader and started beading.  The thread (from the kit) is slippery.  The needle kept sliding off. The second time I needed to thread the needle was a struggle  I never did thread and decided it was time to quit for the evening. 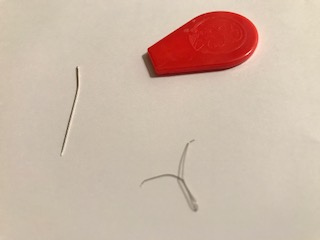 The struggle ended with a broken threader
and a bent needle. 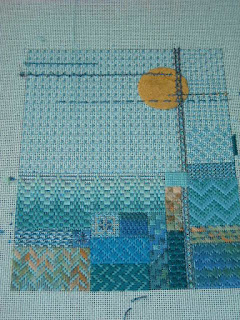 So at the end of last night, this is where I was.
The 2nd line from the top only has beads half way across 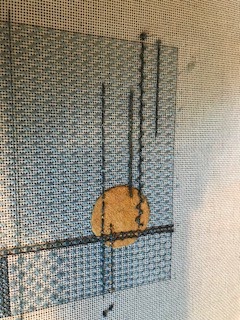 Forgive the sideways view.
It's the correct position in my file but not here.
Anyhow the beading is complete with a different
needle - my trusty quilting needles.
The quilting needle has a larger eye which I can thread with no problem
an it is small (thin) enough for the bead to go over it.
Maybe tonight I can get to the border and the new threads.

Your piece is very pretty and I am glad you are working on it again.

This is so pretty. Such lovely colours. Sometimes the best thing to do is just put our work aside till morning!

Very cool! And so glad others dropped in on the LNS. :)