It started out to be a simple job - prop up the mailbox which was leaning worse than the Tower of Pisa.   Trying to shim it did not work, it actually made it lean more.   Getting hubby invovled made it even more complicated.

We ended up at the hardware store looking at various options.  None of which were appealing.  Between my back problem and hubby's torn rotor cuff,  digging was not much of an option.  Nor was using the drill to cut off poart of hte old post and then figure out if it would be tall enough and drill a spike into it, etc, etc.  The option we chose was to buy a new rubbermaid/plactic mailbox with wood post and spike.

The old post came out really easy -it seems that most of the wood underground had rotted away and there was this short spike left.  No wonder it leaned.  PUtting in the new one was somewhat easy - hammer the spike into the short post, hammer whole thing into ground, put plastic post over that.  Then the hard part began.  We actually read the directions.  For once, we shouldn't have read them.  The directions were awful.  We undid things and did it ourselves which functioned much better and worked!

As a result we now have this:  (and it prompted our neighbor to prop up their mailbox too. 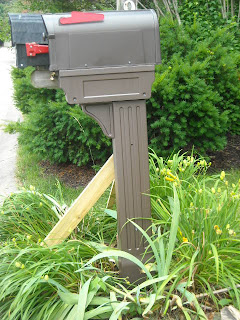 The brown one in the front is ours.  The wood is attached to the one in the background.
Posted by jhm at 5:04 PM